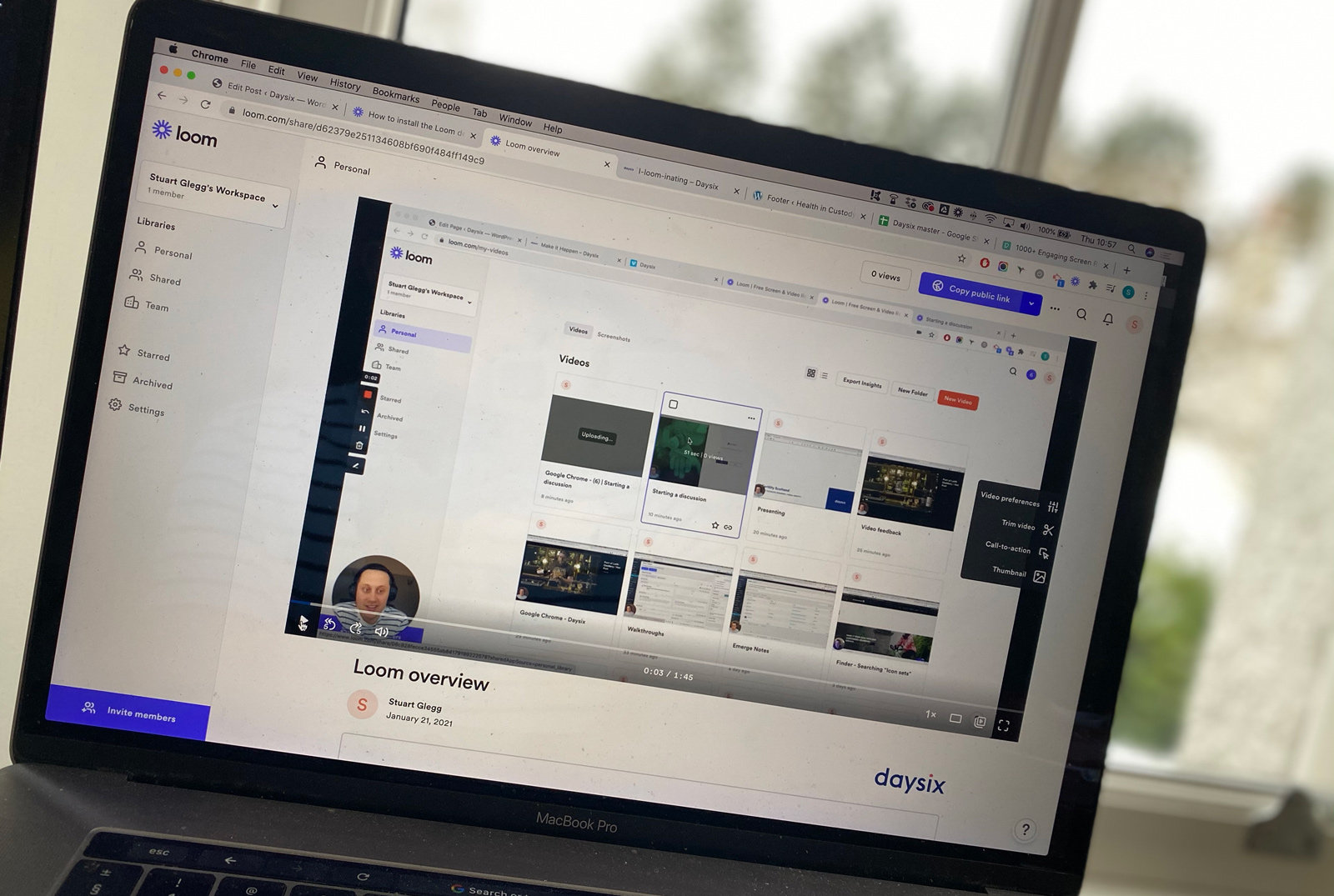 5 ways that Loom changes everything

OK, maybe not everything, but it is the tool that has made the biggest impact to how I work. At daysix, we rely on a number of tools that help us to be more productive, more creative and more organised. We live in Google apps for business, time track with Toggl, create with Adobe Creative Suite and sprint plan with Dev Ops. All of these tools run in the background and I don’t get particularly excited about them. They’re tools.  But then Loom came along and I’ve been telling everyone about it, from the Postie to… well only the Postie because we’re not allowed to see anyone else, but he’s on board.

Loom is essentially a screen capture video app that allows you to record yourself, your voice and what you’re looking at. The extra something is that it then automatically spits your video out as a link so you can drop straight into an email, a message or a website. For me this is a total game changer. I’m the kind of person that would have a draft email sitting for weeks or stall a project because it was waiting for my feedback. It’s not that I don’t have the words (I have too many words) getting around to putting them down in an email has always been a hurdle. Loom allows you to quickly give detailed feedback or run through a presentation and get it off your desk.

I first saw loom when our pals at Float sent through a piece of coms with a live video attached. After that, it kept cropping up in places I like enough to make me go and have a dig about.  I found out more and now it’s my go to tool.  The beauty is that it’s a video recording app –  instead of me typing just watch and I’ll explain why I love it so much.

Simple as that! Its simplicity is Loom’s greatest strength. The impact it has had on how I work has been massive. Here’s a rundown of five ways I’ve found it really useful.

Walk-throughs are so easy to record and the other person can see what you’re describing as well as hear and see you. It’s made sharing ‘how to’s’ and explaining changes on things like wordpress websites much quicker.

It’s a brilliant way to review film work allowing a filmmaker to see your reaction to the film as well as receiving your comments and feedback.

Presentations need to be presented. A PDF landing cold on your laptop just doesn’t have the same impact. We use Loom to record presentations for those who can’t be in the room or on the video call.

We’ve all been in ineffective briefings. Meetings when someone has done a whole lot of thinking ahead of the call and is already halfway down the road. I find loom really useful for sharing an idea before a call and priming a discussion to make it more effective.

This is the biggest one for me. It gets ideas out of my head and allows me to share them! Far too often a good idea doesn’t happen because you never get round to putting it down or to getting people on board and for that, loom is fantastic.